Types of Computer Cooling Systems: Which to Choose?

During its use, a computer continuously generates heat which is why all computers, these days, come fitted with cooling systems. Computer cooling systems are critical to PC’s smoothing functioning since it gets rid of any waste heat that is generated. When a computer system is overheated it is very likely to shut down as heat can cause considerable and, sometimes, irreversible damage to a computer. This is why it is important to invest in computer systems that have the right cooling systems. Let’s take a cool at the computer cooling systems that are now available to us and what would suit our needs.[url=https://flic.kr/p/tkTYo][img]https://farm1.staticflickr.com/112/309427354_6606bb9cdc_z.jpg?zz=1[/img][/url][url=https://flic.kr/p/tkTYo]GPU cooler[/url] by [url=https://www.flickr.com/photos/highlander411/]Don Richards[/url], on Flickr 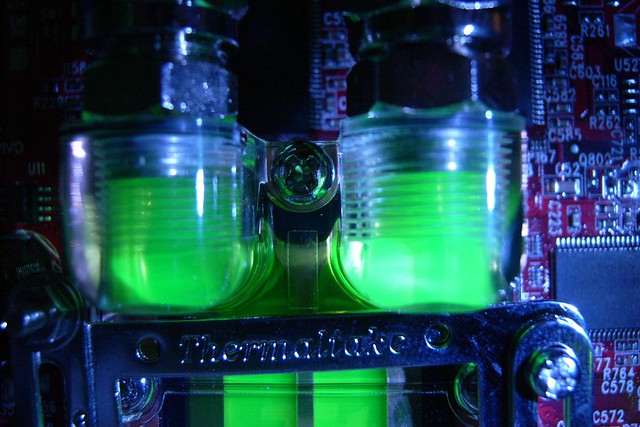 Plenty of components in your computer can be fitted with heat sinks. They keep specific parts of your computer cool by simply dispelling the heat generated from that part. For example, in the case of the CPU, a heat fan with a generous surface area is attached directly onto the CPU chip with either thermal grease or a thermal pad wedged between the two. Since the metal heat is so much better at conducting heat than the CPU chip, it passively takes in and disappears the heat generated. Heat Sinks are common among older CPUs and are best suited to be attached parts that do not generate too much heat. Also, over time, the dust that accumulates on the heat sink can reduce its efficiency considerably.

Unlike heat sinks, fans are an active cooling system and will use energy to run. What fans do is enable the air to move around. So, it will push out the heat generated by the CPU through the PC or the laptop casing. Usually, fans are used with heat sinks in computer systems. In a CPU, a heat sink is first places on top of it, after which, the fan is piled on. A similar set up can be seen in other components like GPUs, Hard Drives and the Chipset. Fans come in variety of sizes, starting from 40mm and go up to 250mm which are specifically used in PCs with high performance.

One of the most effective forms of cooling, the use of liquids is a recent development. The most common liquid used during this cooling process is distilled water since water has a high specific heat capacity and also possesses thermal conductivity.

The liquid cooling systems in a computer are a lot like the internal combustion engines found in most vehicles. A water-block is first set up on the CPU and through this the cooling water runs through the CPU before making its way to a radiator. Often, the radiator itself needs cooling of its own and is kept cool by a fan or a Peltier cooler. Liquid cooling is fairly complex method and is rarely used in computers despite its efficiency. The real danger that comes with liquid cooling is that in case of a coolant leak, the water can seep through to all the critical parts of the computer and can  irreversibly damage your CPU.

Good gaming headsets don't have to be expensive. Here are some of the best quality headsets in the market with affordable prices.

Delivery apps have become essential to order food and medications during coronavirus pandemic. These are best home delivery apps in Egypt.

What is NFT? All You Need To Know About NFT

Nothing is more baffling than witnessing digital NFT artworks sold for millions of dollars. So, what’s so fancy about NFTs that they’ve become so trendy?